Home » Columnists » Have Chainsaw Will Travel » It Needs To STOP… Beginning!

Posted by FOCUS Newspaper | September, 24, 2020 | Have Chainsaw Will Travel

One evening, the other day, a week ago, found me caught up in a bit of goodwill hunting. This is not to say it was a venture seeking out decent acts of humanity…that’d take far more than the afternoon available. Nor does it imply a reviewing of the 1997 dramedy film starring Matt Damon and Robin Williams. An inspiring film, albeit with a very misleading title — there’s not one scene of someone perusing a thrift store in the entire movie or hints on how to do so effectively. However I was that eve doing what the film’s title implied — browsing around the local Goodwill — because, hey thrift!

Some may look down their noses at thrifty shopping, distastefully disregarding the act of purchasing second hand goods. Refusing to recycle and find use in the used, but seriously they’re missing out. Yes, there is that acrid dust bunnies soaked in dried cat piss smell, that’s common at any thrift or rain water damaged garage sale. And yes there is a lot of stuff that should have just been donated to a dumpster rather than put on a shelf for resale. But amongst the board games missing key pieces, VBS tees, questionable electronics (this ain’t no Radio Shack) and general rabble of amassed, abandoned clutter, there are treasures to be discovered, unearthed and beheld.

Among the items procured via thrift (and currently in residence at the House o’ Saw) – a tuba, a saxophone, and a ukulele (I can’t play any of them but damn, what savings!). Original framed art prints, antiqued pottery, Nerf guns (minus ammo) and the occasional chainsaw (no kidding). But the most common items rescued, repaired, relished and reread are books. A small rather modest library (I only have one bookshelf) featuring many a good read, a NM Stephen King collection, as well as some valuable, collectible first editions, has been assembled, amassed and admired courtesy of thrifting.

And thus…. one evening, the other day, a week ago (back around to the beginning we go), thrifty additions to my literary collection were being sought out, when there came an initially subtle yet gradually intensifying sound. So engrossed in titles and authors was I that at first it didn’t register as what was evolving into a steady rhythmic and all too familiar tune. 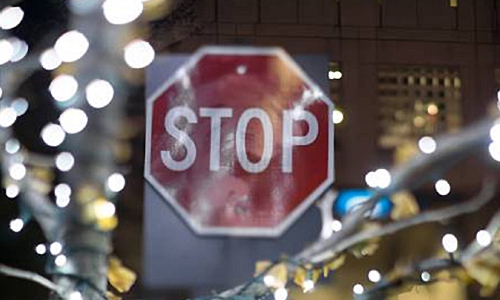 For but a mere moment there was panic was this playing solely in my head to an insane audience of one? No…no I may be outta my mind, but it wasn’t into my head and anger-replaced panic. If that tune were playing over the loud speakers…mid-September, all hell was about to break loose with no intention of good will to be had.

Glancing to the left there were two college English majors, judging by their bookish and academically nerdy discussion, seemingly unfazed by the impending melody. To the right stood an older woman, quietly perusing the children’s books probably for the sake of her grandkids, equally ignorantly oblivious to it.

Not in my mind, too local to be over the speakers and definably coming from…the right! My glance rifled back to the woman — was it her cell phone…no, surely she would have answered it? Madness in every sense of the word swept over me and before it could be contained exploded in her direction in the form of a half growled question, “Where in hell is that coming from?”

OK, they call me “Chainsaw,” not “Mr. Snuggle-puff,” so yeah it scared the shi-dookie out of her. And even though apologies were extended, there’s still guilt on my part…but at least she answered quickly. “It’s coming from this!” she stammered, pulling a brightly festive book from the shelf.

Whew! What a relief, for just a minute there…well just — Whew! She did not care or share my “whew” and edged away. There was the sense of dodging a stress filled pressurized bullet. But as the evening wore on, as more stores were visited, it was discovered the trigger had already been pulled. The thrift book’s “cheerful tune” was actually a foreboding dark omen, already rippling and echoing through retail store aisles.

Why can’t it wait? Why does it come a little earlier every year? For the love of Jehovah, people, it is far too early to be “beginning to look a lot” (or even a little) like Christmas!

I welcome almost all questions and comments via through the Focus, or E-mail me at wanderingchainsaw@gmail.com.