Personal Streaming Pick of the Week:

The Ghost of Peter Sellers (2018) Acclaimed director Peter Medak revisits the locations and the people involved in the creation of his never released, ill-fated 1973 film, Ghost in the Noonday Sun. The film was sabotaged by its star, Peter Sellers, and Medak’s jaw-dropping recounting of the events surrounding the production are fascinating and surely to captivate both film buffs and average viewers alike. Sellers’ childlike antics are but one of the film’s fascinating revelations revealed by Medak. The director’s reflections on the passage of time are also quite moving. A fascinating, one of a kind documentary that I could not recommend more. 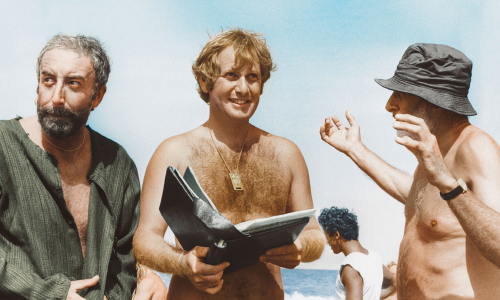 You Don’t Nomi (2020) The 1995 film, Showgirls, has lived on in infamy for the last quarter of a century as the punchline to a long running joke involving the worst films ever made. Director Jeffrey McHale reassess the film in this documentary, which also features participation from most of the principals involved in its creation.

Flannery (2020) is a portrait of the life and times of the revered writer, Flannery O’Connor, who hailed from Georgia. Family members, scholars and fans alike are interviewed for the film, which, while not perfect, is a welcome ray of light on a deserving subject.

A Taste of Cherry (1997) A man determined to take his own life searches for someone who will bury him in this well regarded film from director Abbas Kiarostami. Extras include multiple featurettes and the film’s trailer.

Marriage Story (2019) Adam Driver and Scarlett Johansson star in filmmaker Noah Baumbach’s Oscar winning portrait of a marriage in ruins. Laura Dern took home the Oscar for her portrayal of an attorney but the whole cast shines. Extras include a feature length making of doc and multiple featurettes.

Airplane (1980) One of the undisputed great comedies is getting a reissue for its 40th anniversary. This new edition includes new featurettes, the isolated score, a new transfer and a cast reunion from last winter.

Clueless (1995) One of the essential comedies of the 1990s is getting a 25th anniversary edition with this release. The extras are the same as the 2012 release but this edition is also being issued as a collectible Steelbook package.

Mephisto (1981) A struggling German actor finds himself trying to survive under the Nazi regime in director Istvan Szabo’s acclaimed film. Winner of the Academy Award for Best Foreign Film in its year. Extras include commentary and featurettes.