Kajillionaire (2020) Author and occasional movie director, Miranda July, has turned in her third film. In this one, Richard Jenkins and Debra Winger star as a married couple who are professional scammer’s whose plans go awry when a stranger enters the picture.

Amerika Square (2018) This Greek Academy Award entry for Best Foreign Language Film of its release year is the tale of a young man tasked with helping two migrants escape from Athens. No extras. The Hollywood Reporter stated that it was ‘one of the best European films to date on the subject of immigration.’ 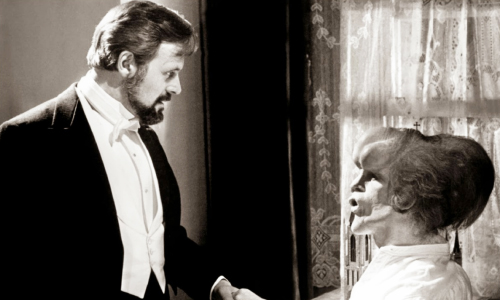 Anthony Hopkins and John Hurt in The Elephant Man

Genesis II/Planet Earth (1973-74) Two television films from the mind of Star Trek creator, Gene Rodenberry, have been paired in this collection.

Helmut Newton: The Bad and the Beautiful (2020) Marianne Faithfull, Grace Jones and Charlotte Rampling are a few of those who appear on camera in this documentary about the life and times of the renowned photographer.

Ghost Ship (2002) The title tells all in this tale of a group of professional salvager’s confronting the terror found on an abandoned ship. Julianna Margulies and Gabriel Byrne star. Extras include a new commentary and new interviews.

Thomas and the Magic Railroad (2000) has been issued in a 20th Anniversary Edition that’s sure to please the younger set. Peter Fonda and Alec Baldwin star in the feature length adaptation of the series.

The disc includes some new extras as well as carrying over previous bonus material.