Hickory – Hickory Regional Airport Manager Terry Clark was presented with a Patriot Award from Employer Support of the Guard and Reserve (ESGR) in recognition of his extraordinary support of an employee who serves in the National Guard. 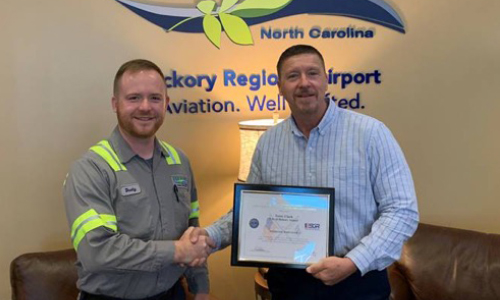 Clark was nominated for the award by Army National Guard Specialist Dusty Garnes, who has worked for Hickory Regional Airport as an airport line technician since August 2017 and was recently deployed for active duty with the National Guard.

ESGR’s Patriot Award program allows an employee serving in the National Guard or Reserve, or the spouse of a Guard or Reserve member, to nominate individual supervisors and bosses for support provided directly to the nominating service member and his or her family.

The Patriot Award reflects the efforts made to support citizen warriors through a wide range of measures including flexible schedules, time off prior to and after deployment, caring for families, and granting leaves of absence if needed.

“The City of Hickory and Hickory Regional Airport is proud to employ and support all National Guard and Reserve service members. We salute Dusty Garnes, and others like him, who answer the call to serve our great nation,” noted Clark. “I am humbled and honored to have been nominated by a member of our staff to receive the Patriot Award.”

Clark has worked for the City of Hickory since April 1981 and has served as manager of the Hickory Regional Airport since 2007.