Fall has finally fallen and…yes I am well aware that according to the calendar date autumn was “officially” ushered in almost a month ago. But seriously it’s been hot as hell and hasn’t felt very fall-like. When the temperature falls then it’s fall, that’s why we call it fall…because the temperature does. Any-who, either way- it’s fall now! The pumpkin harvest has begun and soon the gourd lobotomizing rituals will commence. Pick out a costume, buy lots of extra candy, make sure your firearms and bludgeoning weapons are at the ready; very soon the dead will walk amongst the living as All Hallows Eve draws nigh.

We are so not doing the “zombie thing” right now. Here we are, week 3 of our annual Hell-o-ween spook-tacular and I honestly just don’t have time for this. The basement flooded due to Hurricane Michael’s residual torrential rains. The building needs to be cleaned out due to unintentionally, disorganized hoarding—we are throwing so much s*** away. Not to mention a to-do list more backed up than…a constipated…umm…something that poops a lot.

Rarely do I balk and back out without backup. Even rarer is handing the task of writing over to someone else. However, circumstances being what they are, it has become a necessity. Thus, since everyone else is away or indisposed of at the moment, the task falls on the questionably capable shoulders of John Q. my yellow stuffed bear sidekick…this is such a mistake. Anyway he’s been preparing by binge-watching every horror movie he could get his stubby little stumps on in fast forward for the last hour and 45 minutes. Be warned John writes the same way he talks—those are not typos. Just put yourself in the mind set of a hyperactive 5 year old with a speech impediment jacked up on a mixture pixy-sticks and LSD and you’ll be OK. It’s all yours, John. 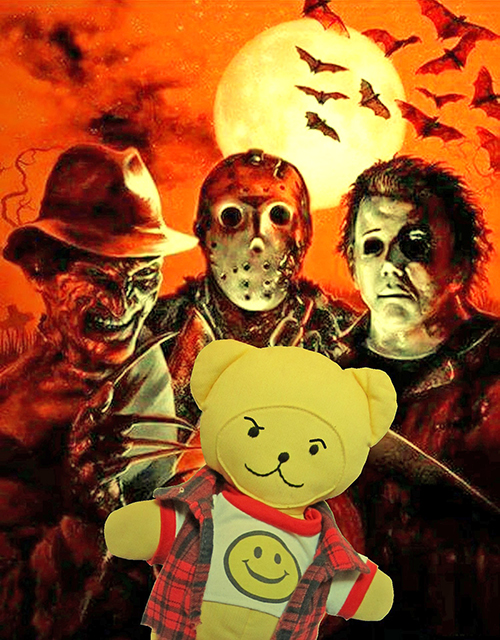 But wait…was this mawinwa sauce or…bwood? Was this cheese or baked fwesh? Was the pizza man weally Dwacula? DUN DUN DUN! Nope, just pizza but thewre was a face in it! It was Fweddy Kwueger!!! He cwimbed out of the pizza and said, “How sweet, fwesh meat!” I told Mr. Kwueger there were fwesh deli swices in the wefwidgewator (that was a mouthful). He said he would make us some sandwiches since he wrecked the pizza.

While he was cutting the cwust off the bwead with his metal fingernails SUDDENLY the door swung open. It was the 13th Fwiday and Halloween guys. They both had scawie masks and big stab knives but they didn’t talk too much. I ask Fweddy to make some extwa sandwiches. The 13th Fwiday man and Halloween guy sat down on the sofa and didn’t have a convewrsation at all.

SUDDENLY there was a scawie sound in the dwiveway so I wooked out the side. There was a wed like bwood Plymouth Fuwy, the passengers door opened slowlier (cwwweeeaaakkk!) and…Yay red balloons and a clown. It was IT and it was the good Tim Cuwry IT, it wasn’t that other IT. If it was that other IT it would have to leave cuz it didn’t know how to be IT. Then a bwoody girwl got out of the backseat. She wooked huwrt…maybe IT would Carwie her… OHHH she has a puppy dog—ewww he wooks dirwty and wabid! Then slowlier out of the dwivers side came… Jack Nicholson… one of the good Jokers but now he was here and Johnny. Finally out of the back of the seat came the master of horwor himself…Vincent Pwice… oohhhhh he’s a ghost Whooohoooo went Mister Pwice. They had Steven King in the twunk… hmm I guess Stephen couldn’t make it. SUDDENLY…I invited them all in for sandwiches!

We played Scwabble while we waited for the sandwiches to get done (I got twiple word scowe) when SUDDENLY …we were out of mustard; so we ordewed more pizza. But this time when the pizza man came it wasn’t not Dwacula again it was…the cweatuwe fwom the bwack lagoon! “GRAWRA!” he said, but Halloween guy had a coupon so we got fwee cwazy bwead anyway. With all the IT balloons and cwazy bwead it was a scawie pawty. Slowly we ate the pizza and told human stowies. I was getting some scarwed but the foaming puppy made me feel safe fwom all the scawie people.

SUDDENLY, it was vewy late and evewybody had to go home. If IT had gotten there more sooner maybe we could have done a sleep over but 13th Friday man was afwaid to ask his mommy anyway. Now for the scawie cwimax to our tewworfiable tale. So I waved bye to my fwiends and was getting weady to wetire when SUDDENLY I wealized…I wasn’t wearing any pants the whole times!!! And there was a girwl who was seeing me wifout!!! Then I wemembered I never do pants cuz they make me get the chafe. Whew, for a minute I thought I was the preverted…preverts are scarwie!!! SUDDENLY – the storwie ends!!!

Next week: Tune in as we wrap up this year’s Hell-o-ween with nothing like this.