Hickory – The costumed characters at Disney World, the historical characters that lead museum tours, and the guy sloshing mead at a Renaissance Faire have one thing in common. Chances are they are all actors, actors hoping for more rewarding work than telling you where the nearest restroom is.

Such is the world inhabited by playwright Brian Hampton’s colorful zoo of characters in the Hickory Community Theatre’s regional premiere of The Jungle Fun Room. This show is the second one in HCT’s “Ghost Light” Series of plays that are being broadcast online. Performances run November 13-21, broadcasting live from the Firemen’s Kitchen. Tickets go on sale on November 5th. 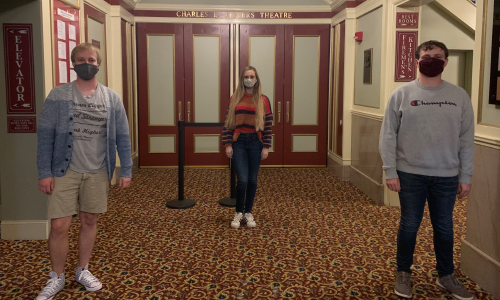 In this funny and occasionally emotional comedy, an assortment of four actors at various stages of their relationship to theater toil at their “day jobs”. In their case, that means running children’s birthday parties at a New York City zoo, while auditioning and rehearsing in their spare time. They’re always hoping for that big break that will deliver them from the Jungle Fun Room, a cinder-block room at the zoo that is, for them, backstage, supply closet, green room, occasional bar, and unisex dressing room all in one.

In this production, three of those actors are played by newcomers to the Hickory Community Theatre.

Rocket Claman, who plays Eve – the most gung ho of the zoo workers – lives in Washington, DC, and heard about auditions for the play from her grandmother. She’s come to Hickory to play this role because she loves the character. She has an Associate in Arts degree from George Washington University and will graduate from Harvard with a B.A. in December 2021.

“I see a lot of myself in Eve,” she said. “She is someone who will always stick up for her friends, who thrives in chaos, and who, at her core, has a deep love of storytelling.”

Joey Nuhfer enjoys playing Trevor, because the character embodies the stereotype of “the new guy” that we all know and love, or at least tolerate. Nuhfer has also performed at The Green Room Community Theatre and serves on the Board of Directors for the Lincoln Theatre Guild. He has a B.S. in Computer Science from Appalachian State.

“The performance spaces (at HCT), are some of my favorite in the area,” he says. “Both spaces are perfect for the shows.

Christian Underwood says, “I love the work ethic of everyone involved both with the show and the organization itself. Everyone is always on their A game and is ready to tackle any challenge!”

Underwood plays Screg, the veteran and go-to guy for the other members of the troupe. He says he loves playing this character because of how loyal Screg is to the people he cares about, even though it doesn’t always seem like that at times. With twelve shows at The Green Room to his credit, Underwood himself is the veteran of the HCT newcomers in the cast when it comes to the local stage. He is another alum from Appalachian State, with a degree in Theatre Education.

Tickets are $18 for individual streaming and $30 for families or groups. Tickets go on sale on November 5th and will be available online at Hickorytheatre.org or by phone through the theatre box office at (828) 328-2283.

The Jungle Fun Room is the first production in the Theatre’s 2020-2021 Season. Paramount Automotive and Sunbelt Xpress are the season sponsors. The “Ghost Light Series, live broadcast theatre is supported by the HartBeat of Main Street Grant Program, created by the Hartford Small Business Insurance and Mainstreet America, with additional support from Corning Optical Communications. Hickory Community Theatre is a funded affiliate of the United Arts Council of Catawba County.