Hickory – The Hickory Community Theatre has just announced the cast of its second online streaming production, The Jungle Fun Room, a comedy by Brian Hampton, directed by Allison Andrews. Performances will be streamed live from the Firemen’s Kitchen, November 13-21. Tickets go on sale on November 2nd and will be available online at Hickorytheatre.org or by phone through the theatre box office at (828) 328-2283. 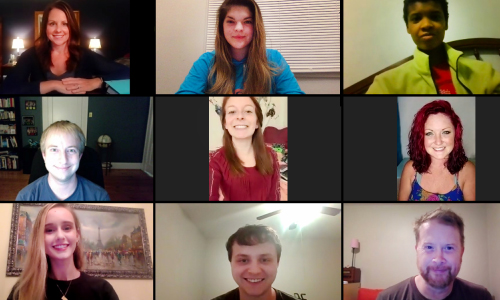 In The Jungle Fun Room Screg, Eve, and Shelly are struggling actors working birthday parties at the zoo. It’s a secret hiding place for them, their dreams, and their ambitions. But, when Trevor, an eager new employee, arrives—followed by Hillary Parker, the birthday girl’s Oscar-winning mom—all are thrown into hilarious mayhem. It’s a mixture of farce and drama—a group hilariously struggling to keep it together—mixed in with the story of the one who got away.

In the roles of the struggling actors Screg is played by Christian Underwood, Trevor is Joey Nuhfer, Rocket Claman is Eve and Sierra Doyle-Rios is Shelly. Oscar-winning actress Hillary is played by Holley Dagenhardt.

The understudies are Mason Burr and Jennifer Canterbury.

Tickets are $18 for individual streaming and $30 for families or groups. Tickets go on sale on November 2nd and will be available online at Hickorytheatre.org or by phone through the theatre box office at (828) 328-2283.

The Jungle Fun Room is the first production in the Theatre’s 2020-2021 Season. Paramount Automotive and Sunbelt Xpress are the season sponsors. The Ghost Light Series live streaming theatre is supported by the HartBeat of Main Street Grant Program, created by the Hartford Small Business Insurance and Mainstreet America, with additional support from Corning Optical Communications. Hickory Community Theatre is a funded affiliate of the United Arts Council of Catawba County.