One of the most clichéd tropes in horror films is the dream sequence that turns out to be a fake scare. The audience gets a good emotional jolt only to find out it really didn’t happen and was only a dream. Critics used to take the slasher films of the early 80s to task for the overuse of this device. It Comes at Night, a supposed horror film with an end of the world subtext, does this not once or twice but—by my count—nearly half a dozen times. It’s a device that’s so overused in this film that it actually becomes comical by the end.

It Comes at Night, the second film from director Trey Edward Shults, whose debut feature, Krisha, was released to heaps of praise last year, is being marketed as part of the horror genre by its distributor, A-24. In the interests of blowing the BS whistle at false advertising I’d like make it clear that It Comes at Night deserves to be labeled a horror film about as much as Schindler’s List needs to be described as being a rollicking, rib tickling comedy. If one were to lump director Shults’ film into a category, the genre of drama would be a more appropriate one. Still, even as a drama, It Comes at Night fails on too many levels to count, the most notable fail being in the storytelling department.

The film opens ominously as an unidentified old man sits covered in sores while his family says their goodbyes, all of them covered in protective masks and gloves. It’s apparent that the man has some sort of illness but, in the cryptic spirit of the film, we never really learn what is afflicting the man. He’s taken outside and promptly put out of his misery. The rest of the film follows what remains of the man’s family as they attempt to maintain the family order while the ‘plague’ rages outside their doors. This is the setup for It Comes at Night.

The characters in the film are never given names. We know them only as father (Joel Edgerton), mother (Carmen Ejogo) and their teenage son (Kelvin Harrison, Jr.).  One night the father catches another man (Christopher Abbott) attempting to break into the house and steal supplies. The would-be burglar claims his actions are only in the interests of protecting his family, which includes a wife and toddler. The father decides to let the man and his family join them. The rest of the film just lurches on in fits and starts as the suspicions grow but eventually it’s hard to care what happens when director/writer Shults insists upon keeping our emotional investment in the characters at bay.

It Comes at Night offers no real resolution or story, for that matter. There’s really not much to recommend outside of the film’s doomed-filled atmosphere. Unfortunately, atmosphere does not substitute for good, solid storytelling, a message that someone should relay to the maker of this film.

Joel Edgerton & Kelvin Harrison Jr. in It Comes At Night 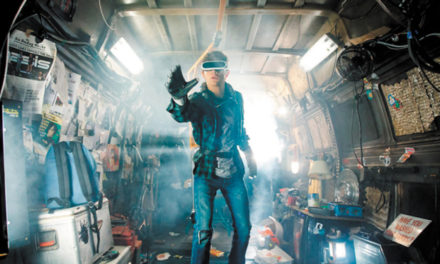