We have already reached the midway point of the college football season. We have gotten some answers to our preseason questions, but there are still plenty of unanswered questions out there. Most will be answered in the next seven weeks before we are left with four playoff teams. Here are some of my thoughts and questions heading down the stretch.

I am not sure there was much question that Alabama would rest at the top of the polls. The Crimson Tide are 7-0. A normal start. But this time, they have a legit Heisman Trophy candidate at the quarterback position. We are used to Alabama having a running back in the running for the coveted award. Having a quarterback like Tua Tagovailoa almost does not seem fair. The Tide can now throw the ball while still being able to run the ball down your throat. 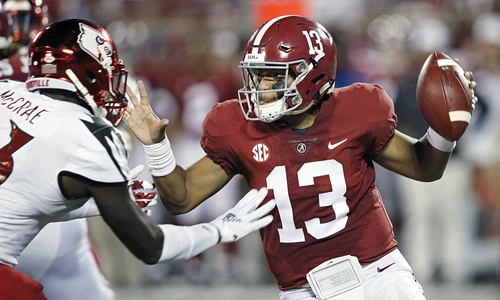 You might remember Tua. He came off the bench as a true freshman last year to lead a spirited comeback for Alabama in the National Championship Game versus Georgia.

Familiar faces likely await Alabama in the playoffs as Clemson and Ohio State are ranked in the top four. Urban Meyer of the Buckeyes says his team can win it all, but who believes anything Meyer says these days.

As always, there have been some surprise teams along with some disappointing teams.

Florida State is 3-3 and have the 111th best offense in the nation. Remember when the Seminoles used to put 40+ points on the board weekly? Bobby Bowden cannot be happy about what has happened to the program he built.

On the other side of the ledger, LSU is back. The Tigers are coming off a convincing win over Georgia and have just one loss (11th ranked Florida). LSU, with its stingy defense, may be able to give Alabama a game. The Tigers have also beaten Auburn and Miami.

Speaking of being back, Texas is back. After a loss to Maryland in their opener, the Longhorns, on the strength of wins over Oklahoma and USC, are back in the Top 10 again. Texas has not been in the Top 10 since 2010.

Topping the disappointment list have to be UCLA and Nebraska. Both have new coaches. Chip Kelly at UCLA and Scott Frost at Nebraska. Frost worked for Kelly for four years at Oregon. In that time, they won 46 games, three conference championships and lost just seven times. Kelly tried his hand at the NFL while Frost eventually led Central Florida to an undefeated season last year. But now that Kelly is back in college football at UCLA and Frost took over his alma mater at Nebraska, it is hard to believe what has happened at their new schools at the midway point. Nebraska remains winless and UCLA just picked up its first win in Week 7, over Cal.

3.6 – That was Eli Manning’s quarterback rating last week against the Philadelphia Eagles. The New York Giants are now 1-5 and will likely have another high draft pick. Maybe they will draft a quarterback this year.

11 – The Baltimore Ravens sacked Marcus Mariota 11 times last week while shutting the Titans out by a 21-0 score. With all recent rule changes favoring the offense, it is hard to not score a single point in an NFL game. Apparently not in Tennessee.

13 –  Carson Wentz is back. Wentz has shaken the rust off his game as he returns from knee surgery. The Eagles quarterback completed 13 of 14 passes on third down. Not surprisingly, Philly destroyed the New York Giants.

82 –  Dak Prescott took to the ground last week as the Dallas Cowboys blew out Jacksonville and its vaunted defense. The Dallas signal caller ran for 82 yards on 11 carries. If you can’t pass, run.