Hickory – On Tuesday, November 10, the City of Hickory’s Bond Implementation Commission held its fall meeting to receive updates on the bond projects and tour construction sites. 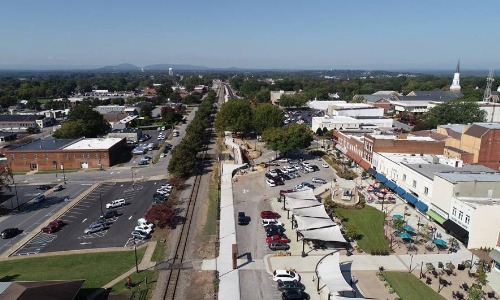 Following the presentation, Roger Young, president of David E. Looper & Company, provided attendees a tour of the One North Center construction site. One North Center will be a mixed-use development offering 95 market-rate residential apartments, along with commercial space for restaurants, retail, and office.

In speaking about the work of the Bond Implementation Commission, Roger Young remarked, “The impact that you as volunteers have had on Hickory, as well as the insights and foresight the City had six, eight, 10 years ago, was monumental.” He added, “The pro-business and pro-lifestyle environment in Hickory, and working together so well with the City, like we have done, isn’t common everywhere.”

“One North Center is a prime example of the bond program succeeding at its goal to spur economic development,” noted Burk Wyatt, chair of the Bond Commission. “The City Walk was a major factor in attracting this type of development project to Hickory’s Central Business District. Thank you to Roger Young and David E. Looper & Company for allowing us to utilize One North Center as our 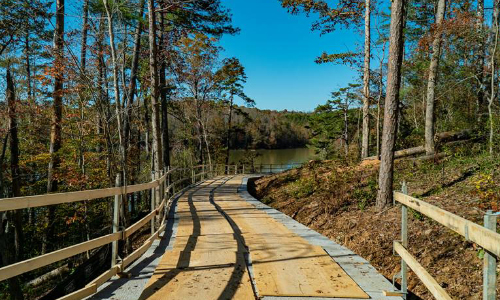 meeting space today and for giving us a tour of this incredible project.”

Construction of Hickory’s City Walk continues along Main Avenue with contractor Neill Grading & Construction. Many sections of the City Walk are now nearing completion. Major focus areas in the coming weeks will be the roundabout and the N.C. 127 pedestrian bridge. The City Walk is slated to be completed by late spring 2021.

Meeting attendees then traveled to the Riverwalk construction site near Rotary-Geitner Park to check out the progress on the project. David E. Looper & Company started construction of the elevated, overland trail in January. The on-land portion of the project is anticipated to be completed by late spring 2021.

A construction contract for the final project components, including the Riverwalk bridge designed by renowned architect Miguel Rosales, was awarded to W.C. English in October. Construction for this portion of the project is scheduled to begin in early 2021 with completion estimated for summer 2022. 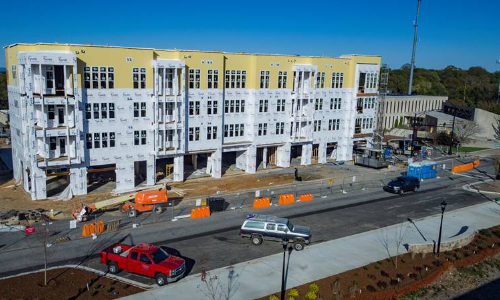 “At this point, we are excited to say that all projects are either under construction, have construction authorization, or are pending NCDOT approval for right-of-way acquisition,” said Wyatt. “As Hickory’s bond program comes to fruition, it is already yielding positive results when it comes to spurring economic development and attracting population. Development activity is happening throughout the city and we’re excited to see the progress continue.”

Photos: (top) Construction of the City Walk continues along Main Avenue through downtown. (middle) The Riverwalk overland trail is currently under construction along Lake Hickory. Protective plywood and temporary handrails are in place during construction. (bottom) Bond Implementation Commission members and meeting attendees were given a tour of the One North Center development project, which is located along the City Walk path.