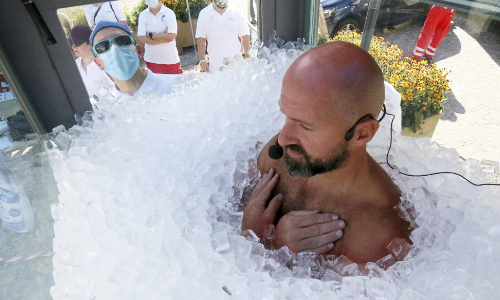 Melk, Austria (AP) – An Austrian man beat his own record for the longest full body contact with ice cubes on Saturday.

Josef Koeberl managed to stay 2 hours, 30 minutes and 57 seconds inside a custom-made glass box filled up to his shoulders with ice cubes. More than 440 pounds of ice cubes were needed to fill up the box, after Koeberl stepped inside wearing nothing but swim trunks.

In order to fight the “wave of pain” caused by the freezing temperatures, Koeberl says he was trying to focus on positive emotions.

“I’m fighting the pain by visualizing and drawing on positive emotions so I can dampen this wave of pain,” Koeberl told reporters. “That way I can endure.”

A small crowd of people watched on as Koeberl beat his own record from 2019 by 30 minutes on the town square of Melk in Lower Austria.

After being taken out of the ice box by helpers he said that the sun felt “really great” on his back.

Koeberl is planning to beat his own record one more time, next year in Los Angeles. His team said that Koeberl’s personal record is also the current world record when it comes to exposing the body to ice for as long as possible.